I literally could not be happier with how the Hall of Fame announcement went yesterday, so congratulations to all the 2019 BBWAA inductees! To welcome Mariano Rivera, Edgar Martinez, Roy Halladay, and Mike Mussina into the Hall, here is a fun fact about each of them:

Mariano Rivera
I've shared the "less postseason earned runs than moon-walkers" fact plenty of times before and the fact that he was the first unanimous selection is not obscure enough for me, but did you know this? Mo is the first Hall of Famer who played a majority of his career with the Yankees and received higher than 90% on the BBWAA ballot since Babe Ruth in 1936. Lou Gehrig got in via a special election, Joe DiMaggio and Mickey Mantle only got above 80%, and Reggie Jackson played a majority of his career with the A's. 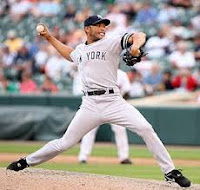 Edgar Martinez
FINALLY! Thank goodness Edgar got in. Speaking of which, one of the reasons I've said for years that Martinez is a Hall of Famer is because the best DH every year gets the "Edgar Martínez Outstanding Designated Hitter Award." But did you know that Martinez won his own award when it wasn't named after him? Yes, besides David Ortiz, Martinez has the most Edgar Martinez Awards with five, while Ortiz leads all DHs in the category with eight. Also, Martinez is the only recipient of the award to win the batting title in the same season; in 1995, Martinez won his first ever Edgar Martinez Award while leading the league with a .356 batting average.

Mike Mussina
I'll keep this one short and sweet. Mussina is the only pitcher to have fifteen straight ten-win seasons while pitching in the American League and was the first pitcher to retire after a 20-game season since Sandy Koufax. Great stuff, Moose!

What do you think of this year's Hall of Fame class? Leave your thoughts in the comments section below. Thanks for reading this post and I hope you enjoyed it. Check back soon for more of "all the buzz on what wuzz."
Posted by Matt Nadel at 7:22 PM