Phil Niekro pitched for 24 years in the MLB, Jamie Moyer pitched for 25 years, and Tommy John pitched for 26. But did you know that someone pitched for an even longer time in the Major Leagues than those guys? I'll give you a hint: this pitcher who played in the MLB for 27 years pitched for the 1969 Mets and was also a teammate of Rod Carew in 1979. That's right; it's Nolan Ryan!

Lynn Nolan Ryan (commonly referred to as Nolan Ryan) pitched in the Major Leagues from 1966, 1968-1993 with the Mets, Angels, Astros, and Rangers. Ryan won 324 games during his career, which is 14th on the all-time wins list. However, ironically, he ranks third on the all-time losses list, having racked up 292 losses during his great career (the all-time losses leader is actually Cy Young). His ERA isn't too shabby, though: 3.19. But undoubtedly, his claim to fame was his ability to strike people out.

There's a reason why he's nicknamed the Ryan Express; the ball came at you like a speeding locomotive. His speedy and hard-to-hit fastballs helped Nolan Ryan collect a record 5,714 career strikeouts, 839 strikeouts ahead of the second-place Randy Johnson. He led the league in strikeouts eleven times, with his single-season high at 383, a feat he accomplished in 1973 with the Angels. In the World Series era, that's a record for single season strikeouts. Also, his 9.5 strikeouts per nine innings pitched stands at fifth on the all-time list, only behind Randy Johnson, Kerry Wood, Pedro Martinez, and Max Scherzer. So basically, you were going to swing and miss three times when you faced the flaming Ryan Express.

The eight-time All Star is also first all time in amount of hits given up in nine innings, having given up just 6.6 hits per nine innings. His 61 career shutouts are tied with Tom Seaver for seventh on the all-time shutouts list. Also, and probably most importantly, his seven career no-hitters are a record that has not been touched since his retirement. He pitched four of them in a span of three years with California, one with the Astros, and two with the Rangers. 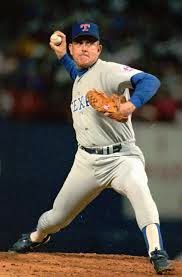 Ultimately, all of these achievements paid off for Ryan, as he was inducted into the Hall of Fame in 1999 with 98.8 percent of the vote. Anyway, thanks for reading this post and I hope you enjoyed it. Check back soon for more of "all the buzz on what wuzz."
Posted by Matt Nadel at 10:50 PM