Today is a special day in Baseball with Matt's history: post number 200! So in honor of the amazing occasion, I decided to blog about Duke Snider III, my virtual and fictional player that I control in MLB 13 The Show for the Play Station 3. By the way, all the stats in this post are the true stats generated by me for Duke while playing the game. When I get to the end of the post, you will see why I chose this topic to blog about for post number 200.

The last time I talked about Snider III, Duke had just won the World Series MVP for the Boston Red Sox, who beat the Brew Crew in the 2021 World Series. In 2022, Duke hits .359 with 46 homers and 160 RBIs. The Sox made the playoffs, but lost in the Wild Card Round to the Astros. I know it seems weird but the Astros became really good in Duke's later years in the MLB. In 2023, Duke has one of his greatest years in terms of home runs, hitting a then career high 60, while also leading the league in slugging percentage. Along with those stats, Duke won the MVP, Hank Aaron Award, Silver Slugger Award, and Gold Glove Award, but the Sox missed the playoffs. Spoiler alert: Boston becomes very bad after this season (much to the chagrin of their owner at the time, renowned former lawyer Jack Rigney).

2024 was all the same for Duke, slapping out a new career high 62 dingers, while winning the same awards as he did the year prior. In other words, Duke basically becomes the modern-day Ernie Banks: great player, but his team did not do very well in general. When 2025 rolls around, Snider is fed up with the Sox having been bad for so long. Thankfully, it's the last year of his contract. Nonetheless, Snider has a typical season for him, 60 homers, a .376 batting average, 243 hits, and 190 RBIs, as well as all of the awards from the year 2023. However, like I mentioned in my spoiler alert, the Sox do not do well. So, Snider does not re-sign with them. Instead, he goes to the San Diego Padres, who won the 2025 World Series. With a new team, Snider basically has the best season ever for any hitter in baseball history: a .332 batting average, 161 runs scored, 221 hits, 12 triples, 59 homers, 14 stolen bases, an on-base percentage of .405, and a record 200 RBIs (see what I did there?). The Padres, meanwhile, win the NL Wild Card with 95 wins and go on to the World Series to face none other than.... the Boston Red Sox. Really? Anyway, the Padres sweep them en route to their second straight title. Snider is awarded the MVP, Hank Aaron Award, and the Silver Slugger Award, but his contract is up with the Pads. So, Snider sadly retires, leaving the Padres and the rest of baseball.

After 13 years in the MLB, Snider retires at age 38 and posts astronomical numbers for his career: a .337 career batting average, 2,356 hits, 644 home runs (sixth all time), 1,905 RBIs (tenth all time), .402 career OBP (third all time to Babe Ruth and Ted Williams), and a slugging percentage of .686 (second all time to the Babe). He was also tied with Joe DiMaggio on the all time games played list. Anyway, Snider III gets elected into the Hall of Fame and baseball historians could only wonder: what if he played longer? Nonetheless, he is still considered one of the greatest players of all time. 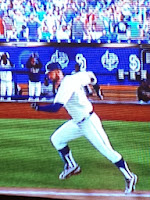 Well, thanks for reading this post. I hope you enjoyed post number 200 and check back in a couple of days for more of "all the buzz on what wuzz."
Posted by Matt Nadel at 5:58 PM