Stadium Name: The Polo Grounds
Teams That Played There: New York Giants and New York Mets
Reason for the Name: When it was built in 1876, the stadium was meant for the sport of polo. The stadium was officially named Brush Stadium in 1911 but it was referred to as "the polo grounds" in the newspapers, so the name was changed in 1920. 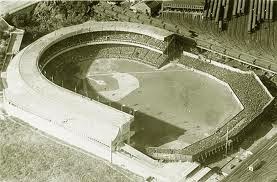 Stadium Name: Ebbets Field
Team That Played There: Brooklyn Dodgers
Reason for the Name: In 1908, Dodgers owner Charlie Ebbets bought the land that Ebbets Field stood on for more than 40 years. The park is named after Mr. Ebbets. But before construction started, the site that Charlie purchased was called Pigtown, because it was simply a garbage dump filled with pigs. However, once construction started in 1912, Pigtown became pig-less because of the baseball cathedral that was Ebbets Field.

Stadium Name: Fenway Park
Team That Plays There: Boston Red Sox
Reason for the Name: Fenway Park is located in the Fenway neighborhood of Boston, Massachusetts. But the real question is what does Fenway mean? Well, before the area became populated with people, the neighborhood was covered with marshland. Another word for a marshland is a fen.

Stadium Name: Wrigley Field
Team That Plays There: Chicago Cubs
Reason for the Name: Similar to Ebbets Field and Charlie Ebbets, William Wrigley Jr. was the owner of the Cubs when Cubs Park was renamed Wrigley Field in 1926. However, from 1914 to 1920, the park was called Weeghman Park. This is because the stadium was originally for the Federal League's Chicago Whales. The Federal League was a baseball league that didn't last past the 1920s. One of the founders of the Federal League was Charles Weeghman, so the stadium was named after him for a short period of time.

Well, those are some famous baseball stadiums and the reasons for their names. I hope you enjoyed this post and thanks for reading it. Check back in a few days for more of "all the buzz on what wuzz."