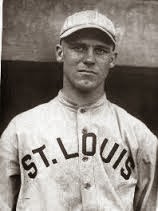 "Gorgeous" George Sisler played for the St. Louis Browns, Boston Braves and Washington Senators from 1915-1930 (excluding 1923). During his career, the man Ty Cobb called the nearest thing to a perfect ballplayer batted over .300 13 times for an amazing lifetime batting average of .340. Sisler won just two batting titles, 1920 and 1922, but batted over .400 in each of them (.407 and .420, respectively). During his .420 season in 1922, he snagged his lone MVP award. He also led the league in stolen bases four times, totaling 375 stolen bases for his career.

Just like Ty Cobb and many other contact hitters of his time, George Sisler collected a shocking amount of career RBIs, 1,178 to be specific, even though he only had 102 career home runs. He also led the league in triples and base hits twice each. Lastly, the 1939 Hall of Fame inductee is known as one of the most intelligent ballplayers of his time, receiving a degree in mechanical engineering from the University of Michigan.

Wow, what a double whammy: an engineer and a Hall of Famer. Anyway, thanks for reading this post. I hope you enjoyed it and check back in a few days for more of "all the buzz on what wuzz."
Posted by Matt Nadel at 8:24 PM