I recently had the honor of reading the book, “1967 Red Sox: The Impossible Dream Season” by Raymond Sinibaldi. The book talks about the Red Sox winning the 1967 pennant after a long and hard season, with four teams in contention for the pennant by the season’s final week. But the Red Sox were able to capture the pennant and the book describes all they key players, teams, stadiums, and other Red Sox moments of the season. 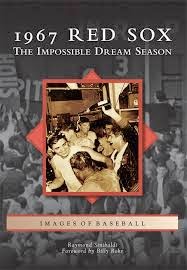 The book overall is a very easy read, because it’s virtually an adult picture book, and even a Bostonian child can read it if he or she wants to get to know the Red Sox and the team’s history. The pictures in the book perfectly capture the hardships for the Sox during the ’67 season and even demonstrate other tough times that the Red Sox went through during their 86-year World Series crown drought. An important thing to note is that the book does not just include pictures. It has many paragraphs, each containing interesting information.

Sinibaldi does a great job describing the final weeks of the '67 season without missing any important points that need to be mentioned. Also, the pictures that were chosen were magnificent, and the book as a whole is very good. I would definitely recommend it to anyone who wants to learn a little about the history of the Red Sox, especially that exciting 1967 season (even though the Sox did lose the ’67 Series to the Cardinals in seven games). However, even if you know a lot about this topic, you should still go pick up the book.

Well, I hope you enjoyed this book review and I hope you pick up “1967 Red Sox: The Impossible Dream Season.” Thanks for reading this post and check back in a few days for more of “all the buzz on what wuzz.”
Posted by Matt Nadel at 8:15 PM