Did you know that there is only one Hall of Famer born in the South American country of Venezuela? This shortstop enshrined in Cooperstown played for the White Sox, Orioles, and Red Sox from 1956-1973 and was elected into the Hall in 1984. His name is Luis Aparicio.

22 years after he was born in Maracaibo, Venezuela, Luis Aparicio immediately began revolutionizing the position of shortstop with excellent fielding and baserunning at the speed of light. He won the 1956 AL Rookie of the Year Award with the White Sox and led the league in stolen bases with 21, the first of nine consecutive times he would accomplish such a feat. He ended his career with 506 stolen bases. The 13-time All Star also won nine Gold Glove Awards at short, the third most Gold Gloves awarded to any player at shortstop in baseball history (only behind Ozzie Smith, who won 13, and Omar Vizquel, who won 11). Even though I haven't mentioned his hitting yet, Luis hit the ball pretty well, collecting 2,677 hits. He also was driven in by his teammates 1,335 times. Lastly, Luis' nickname, "Little Louie" was given to him because he was only five feet nine inches tall. However, he was able to glide across the field like he was six feet ten inches tall. 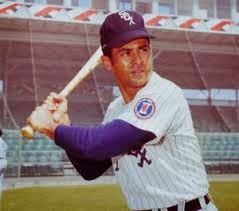 Aparicio was very important to the shortstop position because he finally made people realize how important the position is to a baseball franchise. Had he never played, the shortstop position may not be as appreciated. Anyway, thanks for reading this post. I hope you enjoyed it and check back in a few days for more of "all the buzz on what wuzz."
Posted by Matt Nadel at 2:51 PM