Over the years, baseball players' contracts have gotten higher and higher than they ever have before and such was the case on February 29, 1972. On this exact date, Hank Aaron became the first player in baseball history to make $200,000 per year when he signed a 3-year, $600,000 deal with the Atlanta Braves and, even though he was on the older side, "Bad Henry" was still very, very bad for those three years.

1972 was a wonderful year for Hank Aaron. At the age of 38, he smacked 34 homers out of the park while collecting 77 RBIs and 119 hits. He also made the All Star Game for the 22nd time in his career and was 16th in the NL MVP race. The next year, Aaron hit 40 home runs, the eighth time in his career that he hit 40+ homers in a single season, and drove in 96 RBIs. He batted over .300 for the final time in his career (.301 to be specific), made his 23rd career All Star Game, and placed 12th in the NL MVP voting. In the last year under his lucrative contract, the 40-year-old Aaron broke the all-time career home run record and finished the year with 20 homers and 69 RBIs and his final All Star Game appearance as an Atlanta Brave. 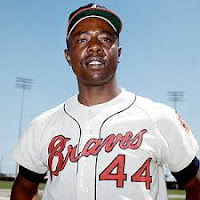 On November 2, 1974, Aaron was traded to the Milwaukee Brewers and then retired two seasons later. His 3-year, $600,000 contract may not look so huge now, but it certainty was gigantic back then and without that then-big contract, some players of today would be earning a lot less money. Thanks for reading this post and I hope you enjoyed it. Check back soon for more of "all the buzz on what wuzz."
Posted by Matt Nadel at 11:29 AM