Spring Training is here, which means it's time to discuss the history of baseball in Florida and Arizona! Today, I want to talk about a beloved former member of the Tampa Bay Rays and his 3,000th hit, which was a unique "first" in baseball history.

Wade Boggs was perhaps the best contact hitter in the American League in the 1980s. The third baseman won Gold Gloves and batting titles left and right for the Boston Red Sox from 1982-1992, but didn't achieve arguably baseball's most wanted award: a World Series ring. So, he took his talents to another AL East team, the New York Yankees. There, he was just a role player, but ended up winning his only World Series ring in 1996, when his Yankees beat the Braves in the Fall Classic. But the man known as the Chicken Man still hadn't accomplished the goal for any contact hitter in baseball history: 3,000 hits. Naturally, one would think that the best team to be a part of when collecting hit number 3,000 is the Yankees, a historical juggernaut where the drama is bumped up by a ton. Well, that is exactly what Boggs did not do. Instead, during the offseason before the 1998 MLB season, he signed with the expansion Tampa Bay Devil Rays.

The Chicken Man wasn't his old self in Tampa Bay, but he still was an exciting piece to the Floridian expansion franchise. He played with the team for two years to culminate his career and in the last year of his amazing career, 1999, he made history. The date was August 7, 1999 at Tampa Bay's Tropicana Field, where the struggling Rays hosted the superpower known as the Cleveland Indians. The game was a slugfest, as Cleveland won the game, 15-10, but Devil Rays fans didn't care because their star reached the milestone of 3,000 hits.  Boggs went 3-4 that day with four RBIs and two of those RBIs were part of history. In the bottom of the sixth with Terrell Lowery on first base and Indians reliever Chris Haney on the mound, Boggs stepped up to plate with 2,999 career base hits. On a 2-2 count, he smacked a pitch to deep right field for his 3,000 career hit, becoming the first hitter in baseball history to achieve the feat on a home run! 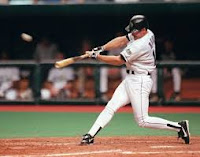 Since then, two Yankees have reached 3,000 hits on home runs: Derek Jeter in 2011 and Alex Rodriguez in 2015. However, it was Wade Boggs who was the first to do it. Thanks for reading this post and I hope you enjoyed it. Check back soon for more of "all the buzz on what wuzz."
Posted by Matt Nadel at 5:46 PM