I found out that I have a Baseball Hall of Fame birthday buddy, but I won't reveal who that is until my birthday, February 21st. But for my next couple of posts, I'll be talking about things related to him. So, for this post, it's time to talk about one of the greatest World Series droughts in history: the Boston Red Sox from 1918-2004.

In 1919, Babe Ruth was sold by the Boston Red Sox to the New York Yankees for $100,000. At the time, the exchange didn't seem like the worst deal in the world, but it ended up being basically just that. You see, prior to the sale of Ruth, the Red Sox were arguably the best team in baseball history, winning five of the first 15 World Series, but after their fifth championship in 1918, the Sox did not win the big one for a whopping 86 years. Because of the coincidental timing of the Sox selling Ruth and the drought, the deal with the Yankees became known as the Curse of the Bambino.

However, Boston did make four World Series during the 86-year period: 1946, 1967, 1975, 1986. In 1946, Ted Williams and the BoSox squared off against Stan Musial and the St. Louis Cardinals. In what is considered one of the more heartbreaking Series of all time thanks to a fielding mishap by Sox shortstop Johnny Pesky in Game Seven, the Cards took the '46 Fall Classic in seven games. In 1967, the Red Sox and Cardinals again met in the World Series, but Bob Gibson and the rest of the Cardinals' squad were able to pitch their way to another World Series title in seven games. 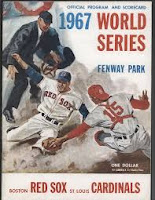 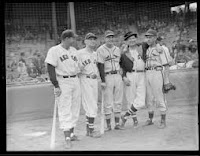 In 1975, the Red Sox met the Cincinnati Reds in the World Series. Both clubs were full of All Stars and this Series is considered one of the best of all time. Like in 1946 and 1967, the Series came down to a seventh game, thanks to a walk-off, Series-tying 12th-inning homer by Red Sox catcher Carlton Fisk in Game Six. Sadly for Bostonians, the Reds took Game Seven and the Series. 11 years later, the Red Sox and Mets faced off on baseball's biggest stage. Boston was one strike away from winning their first championship in 68 years, but the Mets rallied and walked off in  Game Six because of a botched attempt to field a ground ball by Red Sox first baseman Bill Buckner. With all the momentum on their side, New York took care of the Sox in Game Seven to keep the Curse of the Bambino alive. 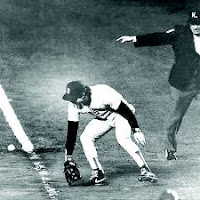 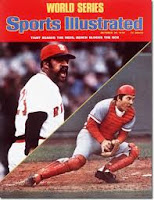 So you know that my Hall of Fame birthday buddy was involved with the Red Sox. That's all I will tell you for now. Thanks for reading this post and I hope you enjoyed it. Check back soon for more of "all the buzz on what wuzz."
Posted by Matt Nadel at 3:46 PM