Carl Yastrzemski was one of the greatest hitters in not just Red Sox history, but baseball history as well. His numbers are tremendous, which explains why he was inducted into the Hall of Fame in 1989, his first year of eligibility. But perhaps Yaz's biggest accomplishment during his career came in 1967, when his BoSox were in the thick of one of the best pennant races in baseball history. Not only did he come up in the clutch, but he did so while making baseball history.

In 1966, Frank Robinson (pictured below) won the Triple Crown by leading the league in batting average (.316), home runs, (49), and RBIs (122). There hadn't been back-to-back Triple Crown winners since the 1930s and with pitching starting to become the focal point of the game, individual hitting statistics continued to decline. Yaz wasn't expected to do anything out of the ordinary that year by any means, except to be his own Yastrzemski-like self. Little did anyone know that he would end up having one of the greatest years ever. 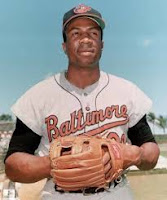 At the end of the 1967 regular season, the Boston Red Sox, Detroit Tigers, and Minnesota Twins were all only separated by one game, with the Sox winning 92 games and Detroit and Minnesota winning 91. The Sox miraculously won the pennant, but that might not have been so without the help of their star left fielder, Carl Yastrzemski. Yaz finished the year with a .326 batting average with 44 home runs and 121 RBIs. His batting average was only the sixth best in baseball, but all the hitters who finished with better batting averages than him played in the National League, which means that Yaz won the 1967 AL batting crown. His 121 RBIs were the best in the game, eight ahead of the second place finisher, Harmon Killebrew. Killebrew and Yastrzemski tied for the league lead in homers at 44, but Yaz still technically led the league in out-of-the-parkers. 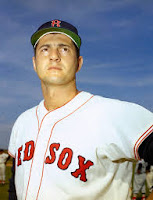 Wait a second: if Carl Yastrzemski led the AL in batting average, home runs, and RBIs in 1967, that means he won the 1967 AL Triple Crown! He also won 1967 AL MVP (his only one) and the Gold Glove Award for his play in left field. What a year for such an incredible hitter! Anyway, thanks for reading this post and I hope you enjoyed it. Check back soon for more of "all the buzz on what wuzz."
Posted by Matt Nadel at 7:56 PM