Unlike a lot of people, I tend to root for many underrated players in baseball history. I'm sure not a lot of people say that their favorite player ever is Mike Schmidt and I'm also sure not a lot of people say that one of their favorite current MLB players is Adam Jones of the Baltimore Orioles. Now, although the person I am about to blog about wasn't on my top five most underrated hall of famers in baseball history, he is one of the most underrated ballplayers ever and one of my personal favorites. Ladies and gentleman, Mel Ott!

Melvin Thomas Ott played his entire 22-year career with the New York Giants from 1926-1947 and was one of the most feared sluggers in the National League. Master Melvin, as he was nicknamed, was loved by Giants fans and for good reason. The eleven-time All Star hit 25 or more home runs in 14 seasons and led the league in out-of-the-parkers six times. But how does a five feet nine, 170 pound man hit so many home runs? Simple: he was a lefty pull hitter who, with his unique batting stance (see pic below), took advantage of the right field wall at the Polo Grounds, which was a mere 257 feet from home plate. Ott hit 323 of his then-NL record 511 homers at the Polo Grounds. By the way, he became the first National Leaguer ever to hit 500+ homers and his 511 career dingers currently stand at 24 on the all-time list. 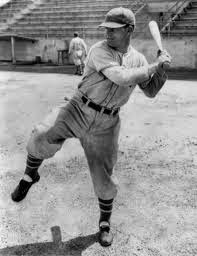 Besides his incredible power, Ott was an excellent hitter and run producer. He drove in 100+ runs in 10 seasons (seven of them consecutive) and finished his career with 1,708 runs batted in. He batted .304 lifetime and collected 2,876 career base hits. However, despite these incredible statistics, the stat that jumps out at me is his 1,859 runs scored, which is 14th on the all-time runs scored list!

Although he only won a single World Series with the Giants, Mel Ott made the most of the 1933 five-game Fall Classic versus the Washington Senators: two home runs, four RBIs, a .389 batting average, and a slugging percentage of .722. No wonder he was elected into the Hall of Fame in 1951 with 87.2% of the vote: his hitting was off the charts!

Anyway, thanks for reading this post and I hope you enjoyed it. Check back soon for more of "all the buzz on what wuzz."