Hall of Famer One: Babe Ruth
His Average Salary per Year During Career: About $40,590
How Much I Think He Would Be Paid in the Current MLB: At least $40 million per year
Why? $30 million dollars a year is a pretty big number even for today, but Ruth definitely deserves that and then some. Miguel Cabrera and Giancarlo Stanton have contracts going into the 2020s that are worth about $30 million a season and they're two of the best ballplayers the current MLB has to offer. But considering Ruth was probably the best player in baseball history, he would get much more than Cabrera and Stanton. A $40 million a year contract is absolutely unheard of, but any team would pay that kind of money for the Bambino.

Hall of Famer Two: Honus Wagner
His Average Salary per Year During Career: About $6,595
How Much I Think He Would Be Paid in the Current MLB: At least $21 million per year
Why? Andrew McCutchen, probably the best hitter on the Pittsburgh Pirates, gets paid about $14,000,000 a year. So Wagner, who also played for the Pirates, would get more than 14 mil a season. Now, considering he was the best contact hitter of his generation, he probably wouldn't get the money that big sluggers make today. However, he does deserve the annual salary of one of the best contact hitters to ever play the game: Derek Jeter. Jeter, from 2006-2010, got paid around $21 million a season. Wagner undoubtedly would get the same and probably even more. 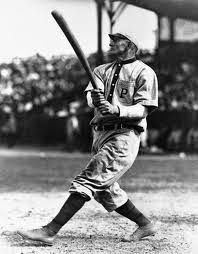 Hall of Famer Three: Willie Mays
His Average Salary per Year During Career: Around $88,410
How Much I Think He Would Be Paid in the Current MLB: At least $36 million per year
Why? Out of all the hitters in the MLB, I would have to say that the Say Hey Kid is most like Mike Trout. Both are amazing five-tool players. Trout will be getting $34 million a year from the Angels from 2018-2020. Because Mays is one of the best pure hitters of all time and shares some characteristics with Trout, I think he would be paid at least a couple more million a year than LA's outfielder.

What do you think of my conclusions? Leave your thoughts in the comment section below. Thanks for reading this post and I hope you enjoyed it. Check back soon for more of "all the buzz on what wuzz."
Posted by Matt Nadel at 4:10 PM