Sticking with the theme of basketball stars who were once baseball players, there was a shooting guard for the 1980s Boston Celtics NBA Finals-winning teams that actually first played baseball before stepping a foot onto an NBA court. I'm sure Bostonians know his name: Danny Ainge.

Ainge, a native of Eugene, Oregon played basketball professionally from 1981-1995 with the Celtics, Sacramento Kings, Portland Trail Blazers, and Phoenix Suns. However, prior to his NBA career, he had a short MLB career. In 1977, Danny Ainge was drafted by the Toronto Blue Jays in the 15th round of the '77 amateur draft. After rising through the minor leagues, Ainge finally got his first taste of big league ball in 1979 with Toronto. 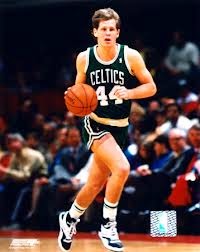 So although Danny Ainge didn't have the greatest MLB career, at least he made a name for himself in the National Basketball Association. Anyway, thanks for reading this post and I hope you enjoyed it. Check back soon for more of "all the buzz on what wuzz."
Posted by Matt Nadel at 2:17 PM