The Best Russian in Baseball History 1/10/15

Some countries are known for their baseball players, like countries in the Caribbean and South America, Japan, Taiwan, and the United States. However, you don’t usually see a Russian professional baseball player every day, especially in Nippon Professional Baseball, Japan’s official baseball league. But today, I’m going to talk about exactly that: a Russian pitcher who played in the Japanese Baseball League (the name of NPB prior to 1950), but this was not an ordinary pitcher; the pitcher I am about to tell you about was the first ever 300+ game winner in Japanese professional baseball. His name was Victor Starffin.

Starffin and his family immigrated from the Russian Empire to Japan during the Russian Revolution. Starffin grew up in Japan and graduated from Asahikawa High School. When he was attending Waseda University in Tokyo, he was being scouted by the Tokyo Kyojingun (the current Yomiuri Giants) for his pitching abilities. The Kyojingun eventually drafted Starffin and Victor officially began his Japanese professional baseball career in 1936.

Boy, was his career great. Starffin pitched in Nippon Professional Baseball from 1936-1955 with mainly the Kyojingun. He posted a 303-176 career record, becoming the first pitcher ever to win over 300 games in Japanese baseball history. Those 303 wins now rank sixth all time. Along with a stinging 2.09 lifetime ERA, Starffin won the Best Nine Award in 1940 for his pitching (the Best Nine Award is awarded to the best player at each position) and the Japanese Baseball League MVP twice, in 1939 and 1940. The pitcher nicknamed the “blue-eyed Japanese” still holds the record for single-season wins (42, set in 1939) and career shutouts (83).

Sadly, in 1957, at the age of 40, Starffin died in a car accident, just a couple years after his retirement. However, his legacy lives on. He was voted into the Japanese Baseball Hall of Fame in 1960 and actually became its first member. He also has a stadium named after him, Asahikawa Starffin Stadium, which is located on the Japanese island of Hokkaido. It’s a shame that Victor Starffin had to go so soon, but he is still considered one of the best pitchers in Japanese baseball history. Thanks for reading this article and I hope you enjoyed it. Check back soon for more of “all the buzz on what wuzz.” 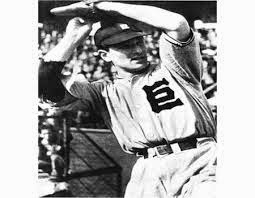