Player One: Randy Johnson
Why? Besides, his 300+ career wins, the Big Unit won five Cy Young Awards (four of them consecutive), went to ten All Star Games, and is second all time in career strikeouts, only behind Nolan Ryan.

Player Two: John Smoltz
Why? Smoltzie has more wins that Don Drysdale and went to eight All Star Games. In addition, besides 213 wins, he has a whopping 154 saves. But for me, in Smoltz's case, you have to look at his postseason numbers: 15 wins compared to just four losses with an ERA of 2.67. His winning percentage and earned run average during October are both much better than the playoff winning percentages and ERAs of his Hall of Fame teammates, Greg Maddux and Tom Glavine. 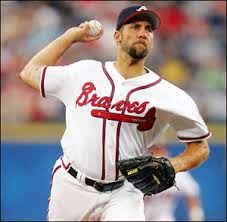 Player Three: Pedro Martinez
Why? He only won 219 games, but with a 2.93 career ERA and 3,000+ career strikeouts, he definitely deserves to be in Cooperstown. The three-time recipient of the Cy Young Award and eight-time All Star consistently led the league in WHIP (walks+hits per inning) and was one of the most dominating pitchers of his era.

Just to clear things up, Smoltz, Martinez, and Johnson are not the only players I think deserve to be in the Hall. I also think that Craig Biggio, Mike Piazza, Jeff Bagwell, Curt Schilling, Edgar Martinez, Alan Trammell, Jeff Kent, and Fred McGriff belong in Cooperstown. Anyway, do you agree with my opinions? Leave your thoughts in the comment section. Thanks for reading this post and I hope you enjoyed it. Check back soon for more of "all the buzz on what wuzz."
Posted by Matt Nadel at 7:09 PM