Today is Hall of Famer Joe Medwick's birthday! To celebrate, I'm going to blog about him.

Joe "Ducky" Medwick played for the Cardinals, Dodgers, Giants, and Braves from 1932-1948. One of the most potent National League hitters of the thirties, Medwick dominated hitting statistics. In his career, he batted .324 (43rd all time) with 2,471 hits. Undoubtedly, his best year was 1937, when he led the league in homers (31), RBIs (154), and batting average (.374), making him the eighth Triple Crown winner in the World Series era. He also led the league that year in runs, hits, at bats, total bases, slugging percentage and doubles! The ten-time All Star only has a single World Series ring, but boy did he do well in the '34 Fall Classic with the Cards. In seven games against the Tigers, Ducky batted .379 and drove in five runs en route to the Cardinals' third championship. The excellent outfielder batted over .300 15 times during his career and never struck out more than 100 times a season. He was eventually voted into the Hall of Fame in 1968, receiving 84.8% of the vote. 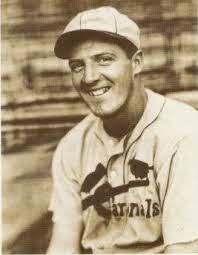 Here's a fun fact about Medwick: he is one of three New Jersey-born Hall of Famers and one of five HoFers who went to high school in the state. When Derek Jeter gets into the HOF, that'll make it four Jersey guys in the Hall.  Anyway, thanks for reading this post. I hope you enjoyed it and check back soon for more of "all the buzz on what wuzz."