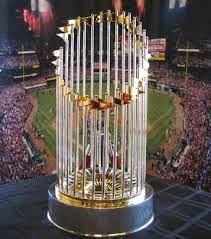 1. Out of the 110 World Series that have been played, 63 of them have been won by American League teams and 47 by National League teams.
2. The New York Yankees have represented the AL in the World Series 36.36% of the time.
3. The state that has the most World Series championships (if you exclude New York) is California. The Dodgers, Giants, A's, and Angels have won a combined 14 Fall Classics. Cali would have more World Series rings, but the A's, Dodgers, and Giants won most of their championships in Philadelphia, Brooklyn, and New York, respectively.
4. Since 1967, when the Cy Young Award was given to a pitcher in both leagues, 10 Cy Young Award winners also received World Series rings in the same year. Some of those pitchers include Greg Maddux in 1995 with the Braves, Randy Johnson in 2001 with the Diamondbacks, and Ron Guidry in 1978 with the Yankees.
5. There are only two teams who have never reached the Fall Classic: the Seattle Mariners and Washington Nationals. However, both teams have made league championship series.
6. Only one team has at least one World Series championship without ever winning their division: the Florida Marlins. Although they have won two World Series in their history, 1997 and 2003, they have not yet captured an NL East title.
7. Former Yankee managers Casey Stengel and Joe McCarthy are tied for the most World Series won by a manager with seven, but Stengel has won the most World Series games with 37, compared to McCarthy's 30.
8. The Cubs have not won a World Series in 106 years, the longest World Series draught ever. Their last World Series championship came in 1908.
9. The player with the most World Series rings is Yogi Berra. In his career with the Yankees, he was part of ten World Series-winning teams.
10. The most World Series won by one team in consecutive years is the New York Yankees with five, from 1949-1953.
11. The batter with the best batting average in a single World Series is Billy Hatcher. In 1990 with the Cincinnati Reds, Hatcher batted .750 in a four-game sweep of the Athletics.
12. The quickest expansion team to win a World Series is the Arizona Diamondbacks. They played their first game in 1998 and won their first World Series in 2001.
13. 13 Hall of Famers have won World Series MVP. Three of them have won the award twice: Reggie Jackson, Sandy Koufax, and Bob Gibson.
14. Only one World Series has ended with a walk-off out. In the 1912 World Series, the Boston Red Sox won their second Fall Classic in franchise history with a walk-off sacrifice fly by Larry Gardner in the bottom of the tenth inning of Game Eight against the Giants. (Game Two was called a tie due to darkness. Otherwise, the 1912 Series would have been a regular seven-game World Series.)
15. Three teams have been to the World Series in the same year that the city that they play in also hosted the Super Bowl: the 1998 San Diego Padres, the 2006 Detroit Tigers, and the 2011 Texas Rangers.

Now that you read all of these facts, impress your friends with them. You're welcome. Anyway, thanks for reading this post. I hope you enjoyed it and check back soon for more of "all the buzz on what wuzz."
Posted by Matt Nadel at 10:33 PM