The offseason is officially here and I can already sense some great free agent deals in the future. But in today's post, I want to talk about one of the first huge free agents in baseball history. And when I say huge, I mean New York huge.

Reggie Jackson played for the A's, Orioles, Yankees, and Angels in a Hall of Fame career from 1967 to 1987. In his 21 years in baseball, Jackson swung one of the best bats in baseball. The 14-time All Star outfielder hit 563 career long balls, 13th on the all time list. He started his career with the A's (in Kansas City) and won three consecutive World Series championships with the club, from 1972-1974. Jackson won MVP of the '73 Fall Classic against the Mets, hitting .310 in the Series. After playing in Baltimore for 1976, Reginald was granted free agency, which meant that he could sign any team that was willing to sign him. Luckily for Yankee fans, Reggie was interested in playing in the Bronx and signed with the Yankees on November 29, 1976. The reason I'm mentioning this is because free agency was a very new concept back then in the MLB and Jackson was really the first big name player to be signed by another team like that. 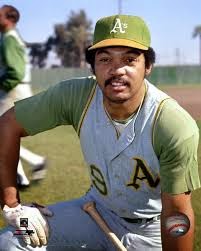 Jackson would go on to have a great career in pinstripes. In fact, he had such a great career for the Yanks that he actually went into the Hall of Fame as a Yankee. Anyway, Reggie led New York to the 1977 World Series and made history. In Game Six against the Dodgers, he hit three home runs...on three consecutive swings! The first two were great line drive dingers, but the third one was a magnificent, booming shot to straight away centerfield off of a knuckleball thrown by Dodger reliever, Charlie Hough. All the Yankee fans at Yankee Stadium that night were screaming their heads off, shouting "Reggie! Reggie! Reggie!" Reggie's five homers in the Series earned him WS MVP and an awesome nickname: Mr. October. Jackson won another ring with the Yankees in 1978, but never won another Series after that. I mean, five World Series rings isn't too bad, right? 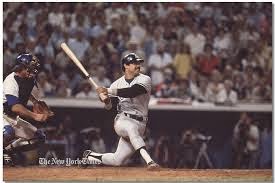 Although he is the all-time leader in strikeouts with 2,597, Jackson is still known as one of the best. The the A's and Yankees have retired the number that he wore when playing for each franchise (9 for the A's and 44 for NY). The four-time home run champion was elected into the Baseball Hall of Fame in his first year of eligibility, 1993, with 93.6% of the vote. Anyway, thanks for reading this post. I hope you enjoyed it and check back soon for more of "all the buzz on what wuzz."