Godzilla: Japanese Star in the Movies and on the Baseball Field 11/20/14

Being a Yankees fan, I loved the 2009 World Series-winning Yanks. They had some great hitters, like Derek Jeter, Jorge Posada, Mark Teixeira, Robinson Cano, and Nick Swisher. But perhaps my favorite hitter on that team was the one who contributed the most for New York in that '09 Fall Classic: Hideki Matsui.

Hideki "Godzilla" Matsui was born in Ishikawa, Japan and started his baseball career in Nippon Professional Baseball. He was drafted by the Yomiuri Giants in the first round of the 1992 Draft and appeared for the Giants the next season. His ten-year career in Japanese baseball was amazing: he went to nine All Star Games, won the league MVP three times, was a member of a Japan Series-winning team three times (the Japan Series is the World Series but in NPB), and won the Best Nine Award eight times (it's basically the award given to the best player at each position in each league). His stats with Yomiuri are also astounding, hitting 332 home runs and driving in 889 runs. After the 2002 NPB season, Matsui signed with the MLB's New York Yankees and he ended up having a great career in pinstripes. 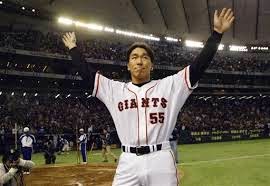 In his rookie season in American baseball in 2003, Matsui made the All Star Game and came in second for Rookie of the Year voting. In 2004, he again made the All Star Game and for the second straight year, played in all 162 games of the season. One of his best years was 2007 with New York, when he hit 25 home runs, collected 103 RBIs, and batted .285, but his best year in the MLB was 2009. In the Yankees championship season, Godzilla smashed out 28 dingers and drove in 90 runs, but his best work in '09 was yet to come. The Yankees eventually made it to the World Series to face the defending champions, the Philadelphia Phillies. The Bronx Bombers ended up winning the Series in six and it was mostly because of Matsui. He recorded eight hits, three home runs, eight RBIs, and a batting average of .615! He got six of his eight RBIs in a Game Six performance that tied the World Series single-game record for runs batted in with fellow former Yankee Bobby Richardson, who drove in six runs of his own in Game Three of the 1960 World Series. Matsui's amazing Fall Classic spectacular earned him 2009 World Series MVP honors, becoming the first Japanese player to ever do so. 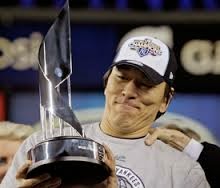 Matsui ended up playing three more years in baseball after 2009 with the Angels, A's, and Rays. In his entire MLB career, he cracked 175 home runs and drove in 760 RBIs. He was such a fan favorite in Yankee Stadium that I will never forget his great hitting. Anyway, thanks for reading this post. I hope you enjoyed it and check back soon for more of "all the buzz on what wuzz."
Posted by Matt Nadel at 7:49 PM