As I promised in my last blog about fielding nicknames, today I will be blogging about some of the best baseball pitching nicknames of all time.  I will be splitting this topic in two blogs, because I have many good pitching-related nicknames, so here's blog number one:

Dr. K - Dwight Gooden
We all know this pitcher; won the World Series in 1986 with the Mets, no-hit the Seattle Mariners with the Yanks, and also won a World Series with the Bronx Bombers in '96. In a 16-year career from 1984-2000, with mainly the Yanks and Mets, Gooden earned his nickname rightfully by striking out 186 batters per year. Impressive, right? Well, he also won Rookie of the Year in '84 and a Cy Young Award in '85. Irrelevant to his nickname, but a funny stat, he won a Silver Slugger Award in 1992 with the Mets. 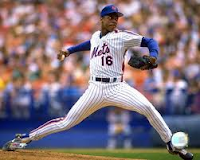 The Barber - Sal Maglie
In his 10 years in baseball, Sal had a 3.15 career ERA, 119 wins, and faced Don Larsen the day Don pitched his 1956 World Series perfect game.  The reason he was called "The Barber" was because he would throw the ball around batters' chins who were crowding the plate and gave them close shaves, but he only plunked 44 batters in his career. Fun fact about Maglie: he played for all three New York teams of his time, the Giants, Dodgers, and Yankees.

The Terminator - Jeff Reardon
From 1979-1994, for mainly the Mets, Expos, Twins, and Red Sox, Reardon had 367 career saves, 7th in baseball history. He is called "The Terminator" for his ability to "terminate" the team he was facing in the late innings to preserve his team's victory. He made it to a World Series with the Braves in '92, but lost to the Blue Jays. Reardon also had a career ERA of 3.16.