Today I will be starting a series of blogs about the greatest nicknames in baseball history. This blog will be about the nicknames pertaining to speed:

Commerce Comet - Mickey Mantle
I know what you're thinking: Mickey Mantle was speedy? Well, the answer is yes. Although he never was a stealing kind of guy, he could run the basepaths in about 12 seconds! The reason he was called the "Commerce" Comet was that he was born in Commerce, Oklahoma. Mick is also on my all time dream team.

Larcenous Lou - Lou Brock
Lou was once the all time steals king, but the king was overthrown by someone else on this list. He still has the most steals in World Series history (14), and has the second most steals all time, with 938. For those of you who don't know, the word larcenous means acused of "stealing".

Mick the Quick - Mickey Rivers
Rivers is the only non-Hall of Famer on this list, but still earned his nickname. He did steal, but his real talent was hitting triples. He was also very speedy in the outfield. 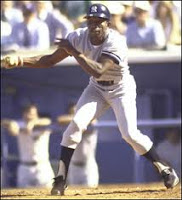 Fordham Flash - Frankie Frisch
Frisch had 419 stolen bases in his career. Along with Mick the Quick, he was also great at legging out triples during the '20s and '30s. He is also sixth all time in World Series steals with nine. 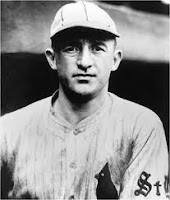 Man of Steal - Rickey Henderson
Rickey is the all time stolen base king in baseball history, with 1,406 career SBs. He had 3,055 hits, which basically calculates to almost one steal per two hits. He also has the most career runs scored with 2,295. Want to know something funny? He also was caught stealing the most times, with 335.

Please check my blog in a few days for the next part of this series which will be fielding nicknames.  I am taking suggestions for how to title the next blog.

By the way, please fill out my new survey about the White Sox in the right column.  In the last survey about whether Albert Pujols would get out of his slump, the results were 8 yes, 4 no and 2 not sure.