Now that I've blogged about Proficient Pitchers nicknames (part one and part two), it's time for hitting nicknames. Here it is: 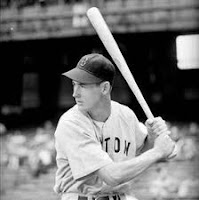 The Big Hurt - Frank Thomas
Called "The Big Hurt" because of his unbelievable power, Frank Thomas brought fear to every pitcher he faced. He hit 521 homers, had 1,704 RBIs, and he batted .301 in his career. From 1990-2008 with the White Sox, A's, and Blue Jays, he went to 5 All Star Games, and won 2 MVP Awards. Thomas  was injury-prone, so he missed a lot of games, but still had great stats. That proves how good of a hitter he was. 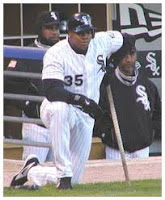 Hammerin' Hank - Hank Aaron
From 1954-1976 with the Braves and Brewers, Hank Aaron was awesome. 755 career homers: second all time, 2,297 RBIs: first all time, 3,771 career hits: third all time. He had such great numbers that the best all around hitters in the AL and NL are now given the Hank Aaron Award. That's how good of a player Hammerin' Hank was. Just that good.

Sultan of Swat - Babe Ruth
The Babe was the best. He is the best player to play baseball and no one will top him. And I'm not just saying that because I'm a Yankees fan. He hit .342 lifetime, 714 career homers, 2,213 career RBIs. That's impressive. Very. In 1927, he hit 60 homers, which at the time of his career (1914-1934 with the Red Sox, Yanks, and Braves) was the most hit in one season. Did you know he started out as a pitcher and he was great at that too?  He had to play the outfield due to a shortage of players during World War I, and the team then recognized his true hitting talent. A funny stat about Ruth is that Hank Aaron broke two records of his which were once career highs: homers and RBIs. Babe died in 1948 because of throat cancer, but his legacy will live on forever. 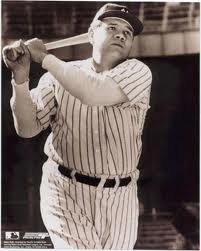 Those are some of the greatest nicknames pertaining to hitting of all time. Speaking of nicknames, don't forget to vote on my Splendid Speedies survey (on the right column above the Blog Archive). Only one day left, and then we will start the Fabulous Fielders survey!!!! I will be revealing the winners of the survey soon, so vote! My final nickname-themed blog will be posted in a few days and it will be all-around nicknames.

Thanks to all of you for reading my blog!  It just went OVER 3,000 PAGE VIEWS in less than three months since my first blog on April 2nd!!  If you like my blog, please tell others about it, and also sign up for emails of future blog posts (if you haven't done that yet) by submitting your email address where it says "Receive Blog Posts By Submitting Your Email Here" in the right column above the survey.