I hope all of your teams are doing well so far in the baseball season! Here is my next blog:

In 1961, the Washington Senators moved to Minnesota and were renamed the Twins. Minnesota is much cooler than Washington D. C., so you would expect all of the Twins to flop, right? Kinda. They were 70-90 that year, but there was a bright spot: Harmon Killebrew! Not only in that season did the slugger shine, with 42 homers and 122 RBIs, but he crushed AL pitching. From 1954-1975, Killebrew hit 574 homers and 1559 RBIs. He won the AL MVP in '69, and helped the Twins to a pennant in '65. But who was the Killer's successor? Here's a hint: Carew. 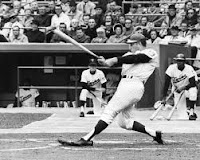 Rod Carew was probably the most dominant contact hitter from 1967-1985. He had 3053 hits. He was awarded the MVP award in 1977, and had a career batting average of .328. Another great achievement in Carew's career was that he made it to all but one (his last season) All-Star game his entire career. A funny fact about Killebrew and Carew is that they are one of the only pairs of teammates to be elected into the Hall of Fame, and have their last name's rhyme. Now that's what I call a "Twin killing".