The Cleveland Cavalier before the NBA team 4/9/12

The season has started and to commemorate this occasion, I want to talk about the only pitcher to pitch an opening day no-hitter:

In the '30s and '40s, Hank Greenberg and Joe DiMaggio dominated baseball, along with many others. But, perhaps the greatest pitcher of this time was "Bullet" Bob Feller. Feller pitched in 18 major-league seasons with the Indians, and won 266 games. Not bad for someone who lost playing time because of World War II military service. As I mentioned before, he is the only pitcher to pitch a no-hitter on opening day, which in the no-hitter's case, was Opening Day, 1940, early in Rapid Robert's career. Wow, I've never talked about a national league player before(who didn't have to play with these war horses), but I'll get to it, don't worry. 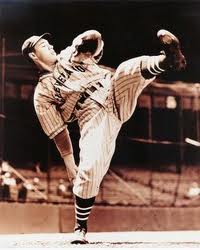