North American countries are represented throughout baseball, but a lot of people forget that Canada has produced some pretty amazing players. With that, here are my top five favorite Canadians in baseball history:

Number Five: Eric Gagne
Why? Gagne became the NL single-season leader in saves in 2003 when he saved 57 games. The three-time All Star also won the Cy Young Award that year, becoming just the fifth NL reliever to win the award. He finished his career with 187 saves. 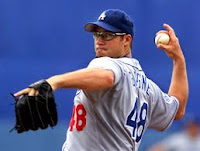 Number Four: Russell Martin
Why? One of the best catchers of his generation, Martin is a four-time All Star and placed second in the MLB in 2015 in home runs by a catcher with 23. In ten years in the league he has hit 142 home runs and is projected to have a very decent 2016 season.

Number Three: Larry Walker
Why? This five-time All Star, seven-time Gold Glover in right field, and three-time Silver Slugger was one of the first great players of the Colorado Rockies franchise. He batted .313 lifetime while also homering 383 times in his career.

Number Two: Joey Votto
Why? The 2010 NL MVP and four-time All Star always seems to be in the Most Valuable Player conversation. He's led the league in walks in four of the last five seasons and has batted .311 in his career. Oh, and his 192 career home runs aren't too shabby, either.

Number One: Ferguson Jenkins
Why? Was there really any doubt that Jenkins would be #1? The Canadian-born pitcher is the only Canadian in the Baseball Hall of Fame and for good reason: 284 career wins, a lifetime 3.34 ERA, and 3,192 career strikeouts (12th all time). What a career!

What do you think of my list? Leave your thoughts in the comments section below. Thanks for reading this post and I hope you enjoyed it. Check back soon for more of "all the buzz on what wuzz."