Opening Day for the 2014 Major League Baseball was today! I did not wake up at four o'clock in the morning to watch the game in Sydney, Australia between the Dodgers and Diamondbacks, but I still want to talk about one of the teams playing in the first game of the 2014 baseball season. Considering I blogged about the Dodgers and their history in one of the first posts in Baseball with Matt history (click here to read that post), here is a brief history of the Arizona Diamondbacks.

Arizona already had a history in Major League Baseball, having already been a host for Spring training games since 1946. However, on May 9th, 1995, the City of Phoenix was awarded a baseball franchise that would later be called the Arizona Diamondbacks. They were called this due to the many diamondback rattlesnakes that live in Arizona.

The Diamondbacks' first season was in 1998, but they only won 65 games. But that all changed in 1999. They became the quickest MLB expansion team to win a division championship by winning 100 games. Sadly, they did not win the World Series that year, but they did two years later (against the Yankees)! After beating the Cardinals in the NLDS and the Braves in the NLCS, the D-backs beat the Bronx Bombers in the Fall Classic in seven games. In fact, that seventh game was one of the most famous baseball games in World Series history, ending on a walk-off single by Louis Gonzalez, the only Diamondback to have his number (20) retired by the team in its history. However, the Diamondbacks have had other great ballplayers play for them, like Curt Schilling, Randy Johnson, Matt Williams, Steve Finely, and Justin Upton. 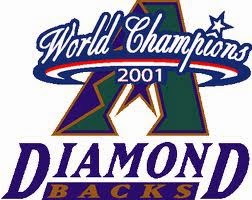 Since their inception, the Diamondbacks have won the NL West five times, 1999, 2001, 2002, 2007, and 2011 and their single World Series championship in 2001. With star hitters like Paul Goldschmidt and Mark Trumbo and excellent pitchers like Patrick Corbin and Trevor Cahill, Arizona can possibly win the NL West this year. However, we will just have to wait and see!

Thanks for reading this post. Also, thanks for giving me 90,000+ views! I could have never gained the success I have right now without my fans, so thanks so much. Anyway, I hope you enjoyed this post and check back in a few days for more of "all the buzz on what wuzz."
Posted by Matt Nadel at 2:10 PM