I'm sure that most football fans are familiar with NFL Hall of Fame cornerback and punt returner Deion Sanders. But just like Bo Jackson, Sanders also played in the MLB! He wasn't as good as Bo, but he still is one of the few prominent two-sport athletes.

In the MLB, his most famous moment came in the 1992 World Series, where his Braves met the Toronto Blue Jays. He was on second and Terry Pendleton was on first in the top of the fourth of Game Three. After a leaping catch from Toronto's Devon White in center and Pendleton passing Sanders in between second and third base (which equals two outs), Toronto third baseman Kelly Gruber tried to chase Deion back to second base. Deion almost got tagged, but was able to retreat to second base safely. Or was he tagged? Replays later showed that Gruber did tag Prime Time with his glove, even though Bob Davidson said otherwise when he had to make the call on the spot. To summarize, Deion Sanders is the result of there being one less triple play in World Series history than there should be. 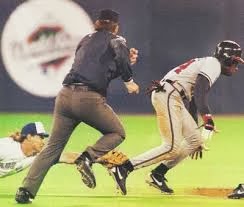 Although Neon Deion did not have the greatest MLB career, he is still remembered by many fans because of his NFL skills. I just wish that Sanders played baseball full-time. Who knows how many bases he could've stolen? Anyway, thanks for reading this post. I hope you enjoyed it and check back in a few days for more of "all the buzz on what wuzz."
Posted by Matt Nadel at 6:18 PM