Cepeda (who has one of the coolest nicknames in baseball history, the Baby Bull) played for the Giants, Braves, Cardinals, Royals, Red Sox, and Athletics from 1958-1974. He got his nickname because his father was called the Bull, so naturally, Orlando was the Baby Bull. Another important note is that the Bull, aka Pedro Cepeda, was an excellent slugger in Puerto Rico and was called the Babe Ruth of the Caribbean. Anyway, Cepeda, the seven-time All Star and Hall of Fame inductee in 1999 batted .312 in his rookie year and won the Rookie of the Year Award unanimously. Orlando went on to bat .297 in his career, with 379 hits out of the park and 1,365 RBIs. In 1967 with the Cardinals, Cha-Cha (another one of Cepeda's nicknames) won the MVP Award with a league-leading 111 RBIs en route to getting his first and only World Series ring. It was the first unanimous MVP selection since Carl Hubbell in '36. The first baseman and left fielder was also usually in the top ranks for being hit by pitches the most times, leading the league twice in this category. He is 75th on this list with being hit by a pitch 106 times during his amazing career, 15th among HoFers. 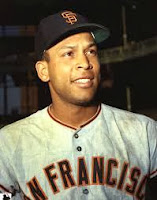 Isn't it coincidentally funny how the Baby Bull became aggressive when he saw the color red (i.e., he won the MVP while he was a Cardinal)? I personally think it's very funny.

Anyway, I hope you enjoyed reading this post. Don't forget to watch me on Nickelodeon tomorrow, Monday, December 30 at 8PM Eastern and Pacific times on Nick News' Web Stars II edition to see me talk about what I love to do: write for you guys. Thanks for reading and check back in a few days for more of "all the buzz on what wuzz."
Posted by Matt Nadel at 12:19 PM