The AL Counterpart to Ralph Kiner 1/1/14

When the name "Hank" is said in a conversation about baseball, many times the name is followed by the surname "Aaron." However, there is another Hank who played baseball and is enshrined in Cooperstown. This Hank could be compared to Ralph Kiner: both players had pretty short Hall of Fame careers and both were big time home run hitters. This Hank played with the Tigers and is considered one of the franchise's best players. Ladies and gentlemen, my grandpa's cousin's high school classmate and the only Hall of Famer celebrating his birthday today, New Years day: Hank Greenberg! 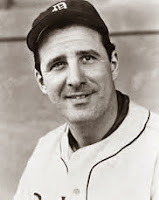 Greenberg may have had a short career, but he certainly had a productive one, getting elected into the Hall in 1956, so happy birthday and happy new year to you, Hank. Anyway, thanks for reading this post. I hope you enjoyed it and check back in a few days for more of "all the buzz on what wuzz."

PS - Here's another couple of things to mention to you:

1) My buddy, Niko, at the Pepper: MLB Blog, just interviewed me.  If you'd like to read the interview, just click here, and please explore the blog. They put up 208 posts in 2013! That's a lot of baseball info.

2) I recently got introduced to some of the guys at the MLB.com Digital Academy. They run a really cool web site that is definitely worth checking out. The site is a platform that helps bring pro level hitting and swing tips to kids, their families and coaches. You can even upload your own hitting video!!
Posted by Matt Nadel at 2:02 PM