Number Five: Most Career Errors-Herman Long
Why? Long played in the late 1800s, a time when position players were pretty good at fielding. Long might have been the worst, however, having committed 1,096 errors at shortstop during his 17-year career. He even has more career errors than career RBIs (1,055)! However, why is he just at number five? Let's just say that the players more towards number one are more "famed"than Mr. Long is over here.

Number Four: Outs Made-Pete Rose
Why? Charlie Hustle owns many records, the most prominent being that he has the most hits of all time. In 24 years of play, you are likely to get a lot of base hits, but you are also likely to get out a lot. Rose, during his career with the Reds, Phillies, and Expos, got out a record 10,328 times. That would explain why his career batting average is a "pedestrian" .303. You would expect someone with the most hits of all time with a high batting average, but Rose also owns the record for most at-bats. Anyway, Charlie isn't number one because he does own that record for most at-bats, which already tells you that he made a lot of outs for his team, so it's unfair to give him the number one spot, a spot no one would want in this countdown. 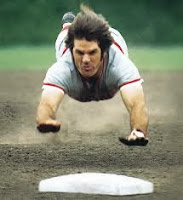 Number Three: Most Career Losses-Cy Young
Why? This is what you are all thinking: "Wait: the pitcher with the most wins in history has the most losses in history, too?! That's crazy!" It might sound crazy, but it is true; Denton True Young has the most losses in baseball history with 316. It's pretty funny how the record for most wins and most losses are held by the same person, but you have to remember: Cy also holds the record for the most started games and the most games completed, so you have to cut Cyclone some slack, just like I did to Pete. Although this record is notorious, it's not bad enough for numero uno.

Number Two: Most Times Caught Stealing-Rickey Henderson
Why? Rickey has the most stolen bases of all time, but he also has been caught stealing the most times as well with 335. Now, I'm going to have to cut the Man of Steal some slack, considering he also has the most steal attempts of all time. However, if your nickname is the Man of Steal, you shouldn't also be known as the Man of Caught Stealing. It shouldn't go together, and yet it has to because Rickey tried to steal so many times. Sometimes he got out, which created a pretty bad record for him.

Number One: Most Career Strikeouts as a Hitter-Reggie Jackson
Why? Mr. October has no excuse. He just struck out a lot. Now, I'm not saying that Reginald Martinez Jackson isn't awesome. I'm saying that he should have been more patient with his swings. You would expect a guy who played 25 years in the league and played every day to own this record, but you would be wrong. Jackson played 21 years and never played a full 162 games in a season. He also didn't have as many at-bats as other guys with longer careers, which would explain his low career batting average of .262. The bottom line is that Jackson is at number one because he has no excuses for holding this record.

Well, that's my list. If you don't agree with it, post your list in the comments section. Also, thanks for reading this post, hope you enjoyed it, and check back in a few days for more of "all the buzz on what wuzz."
Posted by Matt Nadel at 8:21 PM