As some of you know, I share a birthday with no Hall of Famers. The only person who is close to becoming one is Alan Trammell. However, the people celebrating a birthday tomorrow do have a Hall of Fame birthday buddy: Gaylord Perry!


Perry played with the Giants, Indians, Rangers, Padres, Yankees, Braves, Mariners, and Royals from 1962-1983. During his career, he became a member of both the 300 wins club (314) and the 3,000 strikeouts club (3,534). The five-time 20-game winner went on to pitch in five All Star Games and posted a lifetime ERA of 3.10. On September 17, 1968, Perry no-hit the Cardinals and starter Bob Gibson, one of the five 1-0 games that Hoot lost during his career. Gaylord was also a two-time Cy Young Award winner, winning it in 1972 with Cleveland and with San Diego in '78. He became the first pitcher to win the award in both Leagues. Sadly, despite all this greatness, he never won a World Series, but was inducted into the Hall in 1991. 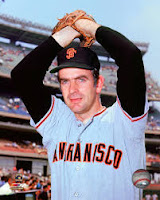 Like I said before, tomorrow is Perry's birthday. So in case you're reading this Gaylord, happy early birthday.

Anyway, thanks for reading this post. I hoped you enjoyed it and check back in a few days for more of "all the buzz on what wuzz."
Posted by Matt Nadel at 8:58 PM