The 2020 season is officially over and the Dodgers are world champions! This is their first championship since 1988, a championship I'd like to discuss this, because of how interesting a team it was.

The 1988 Dodgers didn't have a star-studded lineup. Only three hitters in their lineup had double-digit home runs that year and only one hitter had more than 20. One might call it a coincidence, however, that the hitter with 20+ homers for the '88 Dodgers was the National League MVP, Kirk Gibson. It was his first of three years in LA after spending the first nine years of his professional baseball career with the Tigers, where he won a ring in 1984. Now on the West Coast, Gibson basically carried the Dodgers to first place in the NL West, at least on the batting side of things. In 1988, Kirk Gibson hit 25 homers, batted .290, stole 31 bases and had an OPS of .860. It wasn't even Gibson's best year, but I can't emphasize enough how depleted this Dodgers lineup was, especially compared to the franchise's great lineups of the late 1970s and early 1980s.

As for the pitching? Well, it was electric. Orel Hershiser was the ace, at one point going 59 straight innings without allowing a single run. That record-setting stretch helped his seasonal ERA reach a miniscule 2.26 and was probably the main reason for his '88 NL Cy Young Award. Tim Leary and Tim Belcher each posted ERAs below three, while veterans Fernando Valenzuela and Don Sutton (a Hall of Famer) performed excellently, too. The squad also had a great bullpen, which included All Star Jay Howell and the all-time leader in appearances, Jesse Orosco. All in all, the 1988 Dodgers had an ERA of 2.96, a miraculous mark by today's standards, but a mark that was actually higher than the champions of the NL East, the New York Mets. In a hard-fought National League Championship Series, the underdog Dodgers actually outlasted the Mets in seven games, pitting them against the Oakland A's for a chance at their first title in seven years.

It was no secret that the A's were favored in this World Series, which makes the Dodgers' winning it in five games one of the biggest series upsets in history. But the big play that everyone talks about is in Game One, when MVP Kirk Gibson, who injured himself badly multiple times in the NLCS, got the chance to win the game for LA with the Dodgers down by one in the bottom of the ninth with a runner on first and facing future Hall of Fame closer, Dennis Eckersley. Gibson, barely able to move, was used as a pinch-hitter in this situation. After working the count to 3-2, he waited for Eck's backdoor slider and crushed it over the right field wall in Dodger Stadium for an improbable home run. The dinger is one of the greatest moments in baseball history, and a moment from which the A's never recovered. It was Gibson's only at-bat of the World Series. 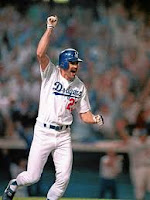