The World Series is only about a series away, so it's time to start imagining how the 2020 edition of the Fall Classic will be entered into the history books! Personally, I'm a big fan of the walk-off home run and hope we see some crazy game-winning dingers during the final stage of the MLB postseason. To honor this, let's run through my top five World Series walk-off home runs of all time.

The game-tying home run by Tino Martinez in the bottom of the ninth was amazing, too, but the walk-off by Derek Jeter off of Arizona Diamondbacks reliever Byung-Hyun Kim in the tenth is legendary for Yankees fans. Because the World Series was delayed due to the September 11th attacks, Jeter's home run came during the first moments the MLB has ever had games during the month of November, hence Jeter's nickname, "Mr. November." I like this home run a lot because Jeter was my favorite player growing up and this is one of his best moments and certainly one of his best home runs.

See? This isn't a Yankees blog! Maz's shot in Game Seven of 1960 ended a back-and-forth affair between the Yanks and champion Pittsburgh Pirates with the first ever walk-off Series-winning home run (and the only one in a Game Seven). Personally, I think Mazeroski is an overrated Hall of Famer, but I have to give credit where credit is due. He made history against a franchise that hadn't been sent such a crushing blow in their 40-year dynasty prior to that homer. It's a big deal, for sure.

To put it simply, this used to be my favorite moment in baseball history, let alone my favorite World Series walk-off home run. While Mazeroski's home run came in Game Seven with the game tied, this walk-off Series-ending home run that Carter hit with the Blue Jays against the Phillies came with his team trailing in the ninth in Game Six. The reasons why Carter's homer is so good is the crazy pitching motion by Phillies reliever Mitch "Wild Thing" Williams that Carter read well, the Hall of Famers on base (Paul Molitor on second and Rickey Henderson on first), and the impact that the homer had on the city of Toronto. A lot of Canadians are baseball fans because of this moment.

"And we'll see you tomorrow night." One of the best home run calls I've ever heard (it was by Jack Buck, Joe Buck's dad and longtime MLB announcer), and it was made during arguably the best World Series of all time. Kirby Puckett is one of my favorite players ever, and the fact that it was him, the star of the Twins championship teams in 1987 and 1991, that hit this home run against the Braves makes it that much sweeter.

All Nelson Cruz had to do was run a little bit faster, and he would've caught Freese's game-tying triple in the ninth, which would've ended the game and the Series for the Rangers. But instead, we were left with one of the greatest couple of innings that the World Series has ever seen, which ended with Freese's walk-off that sent the St. Louis Cardinals faithful into a frenzy. I remember watching this home run live and realizing that because I was watching it, I was part of history. That's why this homer takes the top spot on my list (even though Joe Buck stole his dad's signature line from the Puckett homer for Freese's homer). 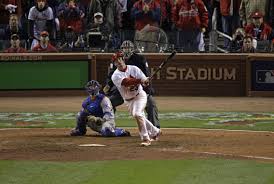 I'm going to get ahead of some of you and address the missing Carlton Fisk homer that the Hall of Fame catcher hit in Game Six of the 1975 World Series to send it to Game Seven. The Red Sox didn't win Game Seven against the Reds! The home run was meaningless in the grand scheme of things! Sure, Derek Jeter's homer didn't amount to much for the 2001 Yankees in the long run, but that homer doesn't need to be carried by magnitude because it was a Game Four and not a Game Six! But anyway, what do you think of the rest of my list? Leave your thoughts in the comments section below. Thanks for reading this post and I hope you enjoyed it. Check back soon for more of "all the buzz on what wuzz."