We are officially in the baseball offseason! In honor of this, the next couple of posts are going to be about some of the biggest free agent signings in MLB history and if they were worth it or not. In this first post, let's focus our attention on Mr. October himself, Reggie Jackson!

Jackson was one of the best sluggers in baseball in the late 1960s and early 1970s, mostly with the Oakland A's. In his time with the A's (and Orioles in 1976), excluding 1967, he averaged 31 homers and 91 RBIs a season. He was a member of Oakland's back-to-back-to-back championship rosters from 1972-1974 and was a particular help in '73, when he took home regular season and World Series MVP honors. But after his 1976 season, Jackson was granted free agency. Looking to make an impact and boost his already-big ego, he made lots of noise by signing with the New York Yankees in one of the first big free agency signings in MLB up to that point. The Yankees had been pretty putrid for most of the decade and thought that Jackson would bring them back to the Fall Classic. Spoiler alert: he sure did.

Jackson's time in New York from 1977-1981 was on par with what he did on the West Coast, for sure. As a Yankee, he averaged 29 homers and 92 RBIs a year, along with a .281 batting average. He came in second in the MVP voting in 1980, hitting .300 with 41 homers and 111 RBIs, all highs for his time in the Bronx. The Yankees, themselves, also benefited from Jackson's five-year stint. They won the AL East every year, except 1979, and even made the World Series in 1977, 1978, and 1981. Although they lost the World Series in '81, 1977 and 1978 were the Yanks' 21st and 22nd franchise championships, milestones that only the Yankees and Montreal Canadiens have tasted in American professional sports. Jackson made his presence known in the '77 Series against the Dodgers, hitting three homers on three consecutive swings in the clinching Game Six, giving him MVP honors for the Series, making him the first player in baseball to win the World Series MVP on two different teams. 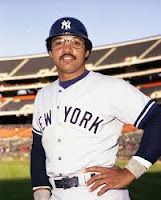 Although Jackson is the all-time leader in strikeouts by a hitter, he still showed an insane amount of power during his 21-year career. He was so great, in fact, that he is in the Hall of Fame. And guess what logo is on his plaque in Cooperstown? That's right, the Yankees' "NY." So, yeah, I think this signing was worth it for the Yanks, even if former manager Billy Martin might say otherwise. Thanks for reading this post and I hope you enjoyed it. Check back soon for more of "all the buzz on what wuzz."
Posted by Matt Nadel at 2:26 PM