The MLB Trade Deadline is here, making it the final couple of hours that teams can conduct trades for the rest of the season! It's also the last moments of the season that we'll really get to see how teams value their players and prospects for the future, so let's talk about that.

Baseball is all about the future. Unlike other sports, once you get drafted onto an MLB team, you do not automatically go straight to the MLB; you have to go to the minors first. Yes, I'm aware of the G-League in basketball and minor league hockey, but most greats in those sports go straight to the highest leagues, while even Derek Jeter spent time in the minors.

Most teams aspire to have a great minor league system, otherwise known as a farm system. There is, however, the free agency approach, but not every team has the money to keep on buying replacements for their departing free agents. Teams with a young championship team and a promising farm system have the most trade leverage out of any team. Take the Braves and Astros, for example. Both teams are leading their divisions, with plenty of star power in their minor league affiliates. They're set for a long time. 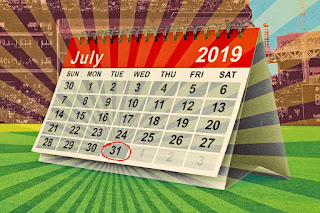 Every year, at the deadline, certain teams designate themselves as buyers or sellers. Buyers are generally teams that are on the edge of playoff contention and are looking for one final piece to propel themselves into October. Sellers, on the other hand, are underperforming teams with a couple of All Stars that have no chance of competing for the rest of the season. Sellers trade their All Stars for prospects in order to improve their long-term future.

At the writing of this post, the only major trade of the 2019 Trade Deadline that has happened is the Trevor Bauer trade, so let's break it down a little bit. Trevor Bauer got traded from the Indians to the Reds, Yasiel Puig and Franmil Reyes went to Cleveland from Cincinnati and San Diego, respectively, and Taylor Trammell went from the Reds' Double-A affiliate to the Padres organization. Cleveland was looking to add some power to their lineup and Bauer is a free agent at the end of the season who was rumored to be traded ever since the beginning of 2019. Hypothetically, if Cleveland really wanted to, they could sign Bauer during free agency. Cincinnati's pitching is one of the best in baseball, making one of their strongest areas stronger, and, because Puig's behavior is so erratic, he was expendable. In addition, the Padres have a LOADED farm system, so Franmil Reyes was also expendable, especially for one of the top prospects in baseball in Trammell.

I will admit that the Trevor Bauer trade is a complicated example of buyers, sellers, and trade value, but it's most definitely topical. Who knows what Puig and Reyes will do on the other side of Ohio, especially considering the Indians' aspirations to catch the Twins in the AL Central. All we know, as baseball fans who understand trade value, is that, in the minds of the GMs of the Indians, Reds, and Padres, this trade was fair. It might not be objectively fair (there's usually a winner and a loser in all trades), but it was fair to the teams involved, which is what made the trade happen.

What trades do you think should be made? Who should be buyers and who should be sellers? Leave your thoughts in the comments section below. Thanks for reading this post and I hope you enjoyed it. Check back soon for more of "all the buzz on what wuzz."
Posted by Matt Nadel at 12:31 PM