I've recently talked a lot about the Rays' analytical intelligence and implementation, so I thought that it would be a good time to discuss how their baseball savvy really got started: the infield shift.

The then-named Devil Rays were about to go up against David Ortiz and the Red Sox. Ortiz was a dead pull hitter who batted lefty and was coincidentally the most powerful hitter in the Red Sox lineup at the time. Maddon noticed Ortiz's pulling tendencies and told his fielders to shift to the right side of the field when Ortiz was batting. Other teams took notice of this tactic and Ortiz's batting average slowly descended through the rest of the '06 season. The Rays continued to implement the shift for other dead pull hitters and the rest of the league soon followed Tampa's ways. Nowadays, shifting has become such a popular style of play that many baseball fans have complained that it should be made illegal.

But this wasn't actually the first time a team shifted its fielders in a specific direction in order to limit a batter's potential damage. Player-manager and Hall of Fame shortstop Lou Boudreau (pictured below) tried to shift his Cleveland Indians infield in July of 1946 against Hall of Famer and lefty pull hitter, Ted Williams. Boudreau later stated that the shift was meant to be more psychological than tactical, but the results were similar to Maddon shifting against Ortiz. The Boudreau shift was later used by the Cardinals in the 1946 World Series against Williams, again as a psychological ploy, and Williams batted just .200 in the Series, helping the Cardinals win the championship. But again, this wasn't actually the first implementation of a shift. Another lefty outfielder named "Williams," Cy Williams, was shifted against in the 1920s. Cy Williams was one of the first real power hitters of the National League and is second only to Babe Ruth in home runs from 1923-1928. 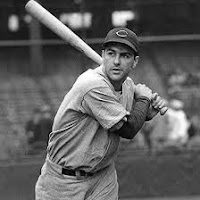 Should baseball ban the shift? Let me know in the comments section below. Thanks for reading this post and I hope you enjoyed it. Check back soon for more of "all the buzz on what wuzz."
Posted by Matt Nadel at 11:07 AM