Relievers don't get enough love. Closers have their own statistic, the save, but what do relievers in general have? Ladies and gentleman, I present to you one of the more under-the-radar statistics that isn't even an official MLB stat: the hold.

So, what the heck is a hold? A hold is when a pitcher comes into the game in relief with their team winning and keeps it that way. That's the simplest definition of a hold, but there are a couple of technicalities. A reliever is only eligible for a hold if he comes into the game in a save situation; he must record at least one out; and he has to leave the game before it ends and keeps his team's lead. This stat was not regularly used until 1999, so great relievers like Jesse Orosco aren't credited with all of the holds they ever recorded. 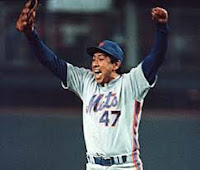 But let's improve on the hold because it definitely has its faults as a statistic. First of all, a big proponent of the hold is that it's calculated by appearance and not by inning. This should be reversed, for sure. Second of all, why does it matter if a reliever comes in during a save situation, let alone with his team winning? Teams make wild comebacks all the time, which could make holds seem meaningless or a non-hold situation very meaningful. And lastly, for this new stat, a reliever has to pitch a scoreless appearance because no reliever should be awarded anything for giving up two runs while only recording one out. That's an in-game ERA of 54.00, but it could still be a situation in which a reliever is credited with a hold. How absurd!

What do you think of this improved hold? Should it have a different name? Leave your thoughts in the comments section below. Thanks for reading this post and I hope you enjoyed it. Check back soon for more of "all the buzz on what wuzz."
Posted by Matt Nadel at 1:10 PM