Welcome to the MLB offseason, when teams try to reshuffle their rosters in hopes of a future run at a World Series title. But first, we have some awards to discuss! As I do every year, I will try to predict the 2018 MLB major award winners, but we're saving that for a different post. In this post, I will be giving some fake awards to Hall of Famers for some of their amazing career accomplishments. So, without further delay, let's get to it!

Face of the Franchise Award: Napoleon Lajoie
What's the award for? Most people don't know who Lajoie is, mostly because he played more than 100 years ago. However, from 1896-1916, Lajoie batted an astounding .338 with 3,243 hits, both among the best marks in their respective categories in baseball history. In fact, he was so good that the Cleveland Indians temporarily changed the team name to the Cleveland Naps, while Lajoie was still on the team. Cleveland wasn't named the Indians until 1915.

Super Star Award: Joe DiMaggio
What's the award for? Joltin' Joe was one of the best hitters of his era, but because he only played 13 seasons in the MLB, he's not regarded as one of the best of all time. But DiMaggio managed to do something that not even Hank Aaron managed to do: make an All Star Game every single year he played. Yes, Joe DiMaggio doesn't have the most All Star appearances of all time (that accolade belongs to Aaron with 25), but DiMaggio made 13 All Star Games in the 13 years he played in the MLB. No other Hall of Fame can say they did that besides the Yankee Clipper.

Neighbor to the North Award: Fergie Jenkins
What's the award for? Jenkins was an All Star pitcher who pitched for mainly the Cubs and Rangers from 1965-1983, winning 284 games during his Hall of Fame career. So, what makes him so special, you may ask? Well, besides being a great pitcher, Jenkins is Canadian and was the first Canadian inducted into the MLB Hall of Fame when he was inducted in 1991 with 75.4% of the BBWAA vote.

The Butt of No Joke Award: Heinie Manush
What's the award for? Please ignore my potty humor, but do not ignore Manush's Hall of Fame worthy career. From 1923-1939, Manush batted an out-of-this-world .330 during his career with just over 2,500 hits. He led the league in hits twice, including a 241-hit year in 1928, which is the twelfth-most hits in a single season in baseball history. He finally got into the Hall of Fame in 1964 via the Veteran's Committee. 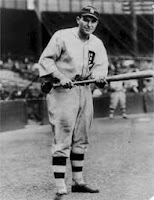