There are plenty of names in baseball that are defined by one statistic or important fact, but baseball players have accomplished way more than just one specific thing. I know, that was some bad explaining, but here are some examples of what I mean:

Lou Gehrig and Cal Ripken, Jr.
Baseball's iron men. The top two hitters in consecutive games played. But so what? It's not like they did anything during their respective games played streaks, right? Wrong. Gehrig is one of the best first basemen in baseball history, averaging 29 home runs and 117 RBIs a season during his 17-year career. Oh, and he also batted .340 lifetime. Ripken, on the other hand, homered 431 times in his 21 years in the bigs, made 19 consecutive All Star Games from 1983-2001 and, oh yeah, is 15th on the all-time hits list with 3,184 career knocks. 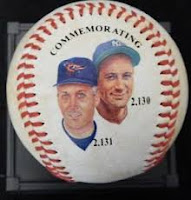 Jackie Robinson and Larry Doby
These trailblazers broke the color barrier in the National and American League, respectively, but if only they were actually HoF-worthy. Psych! They were! Robinson won the 1949 MVP and went to six All Star Games during his ten-year career. He stole almost 20 bases a season and even batted .311 lifetime. Doby led the league in home runs twice, hit 20+ homers in eight consecutive seasons, and even made seven straight All Star Games from 1949-1955.

Joe DiMaggio
56 straight games with a hit is surely an accomplishment, but you know what else is an accomplishment? Making an All Star Game every single year of batting at the major league level. That's right; DiMaggio played for 13 years from 1936-1951 (he missed 1943-1945 due to military service) and made 13 Midsummer Classics. The Yankee Clipper batted .325 during his illustrious career and is tied for the most MVPs in AL history with three (1939, 1941, and 1947).