ERA and WHIP are, in my opinion, the easiest measurements of a pitcher's ability. You'll notice that I didn't say wins. That's because the "win" statistic can be extremely misleading. In some cases, a pitcher can get a ton of run support, allow a lot of earned runs, and still win the game; in other cases, a pitcher can go eight scoreless innings only to leave the game in the ninth with the contest still tied at zero. So, in order to make the calculation of wins seem a bit more correlated to a pitcher's skill, I present to you my new statistic: the true win. 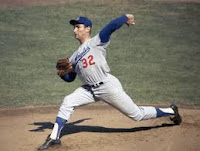