This is my 500th post on Baseball with Matt! I can't believe I've been doing this for almost five years now and I'm so thankful for my loyal readers. You guys are the reason I keep writing, so thank you for looking at my stuff. Now, for my 500th post, I wanted to do something special, so why not talk about one of the most special MLB seasons I've ever witnessed as a baseball fan: the 2017 MLB campaign.

The Homers
Boy, there were a lot of them, a record-setting number to be exact. Giancarlo Stanton smacked a whopping 59 dingers and Aaron Judge added 52 of his own. Hitters like J.D. Martinez, Mike Moustakas, and Logan Morrison shocked fans with their home run numbers, while Edwin Encarnacion, Nelson Cruz, and Nolan Arenado put up their normal, astronomical statistics. So many batters hit over 30 home runs that the Home Run Derby could've had at least twice the amount of competitors it did have and it would've still been exciting. What more is there to say besides people dig the long ball?

The Rookies
As mentioned before, Aaron Judge was a monster this year, but he wasn't the only rookie who shined in the spotlight. What about probable NL Rookie of the Year Cody Bellinger? I also can't forget Andrew Benintendi, Trey Mancini, or Josh Bell, and all the guys you hadn't heard of before the season, like Matt Davidson, Matt Olson, or Ian Happ. But I should also probably mention Rhys Hoskins, the Gary Sanchez of 2017 in terms of immediate carnage of baseballs. Paul DeJong, Hunter Renfroe, and Yuli Gurriel are even more hitters who in one way or another will continue to lead baseball's youth movement for years to come.

The Team Stories
Whether it be the Astros' hot start to the Dodgers' amazing summer to the Indians' record-breaking September, lots of teams had plenty of amazing story lines that carried them throughout the season. Other incredible plot lines includes the Diamondbacks and Rockies and their seasons that defied preseason expectations, and the Yankees who turned their "rebuilding year" into a redefining year. Many teams had things going for them come postseason time, which is why coming up with postseason predictions was so hard for me.

The Postseason
It was an October (and November) that I don't think I will be forgetting anytime soon. There were insane comebacks, nail-biting pitching duels, and one of the greatest World Series games in history. I couldn't care less about how the Fall Classic ended, to be completely honest, because all I can think about now is how grateful I am for having witnessed that Series and the playoffs in general.

The Swagger
It's no secret that baseball's popularity has been dwindling the last couple of years compared to sports like football and basketball, but 2017 saw baseball switch attitudes completely. It wasn't just a sport for people with plenty of patience; it became a sport full of bat flips, walk-off celebrations, and cocky egos. The team that best exemplifies this is the Yanks, who ditched the proper "Yankee Way" in favor of the thumbs-down hand gesture and in-game, post-home run amateur interviews. Baseball just got so much more fun to watch.

Thank you, 2017, for a fantastic baseball season. Let's just hope the offseason features even more unbelievable moments. Yes, I'm looking at you, Marlins front office and probably-former Royals stars. Thanks for reading post #500 on Baseball with Matt and I hope you enjoyed it. Here's to another 500 and to checking back soon for more of "all the buzz on what wuzz." 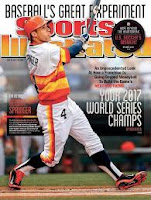