Free agency and the Winter Meetings are just around the corner, so in honor of that, let's talk about some of the best free agent signings in baseball history.

Greg Maddux
After the 1992 season in which he played with a subpar Cubs team, Maddux's contract had run out, so he could sign with any team he wanted. Instead of going for the more lucrative deal and signing with the Yankees, he decided to take his pitching talents to Atlanta and became an absolute pitching star with the Braves. Out of all the teams he played for in his career, Maddux's years with the Braves are definitely his best: 194 wins and a 2.63 ERA in 11 years. Also, don't forget about his three straight NL Cy Young awards from 1993-1995 and his six All Star appearances while playing home games down South.

Randy Johnson
A 35-year-old Johnson signed with the Arizona Diamondbacks in just the franchise's second year of existence. So much of this deal was criticized at first on both sides, but after four straight Cy Young awards won, a co-World Series MVP & a World Series ring in 2001, five All Star teams made, and an average record per season of 17-8 with a 2.65 ERA, the critics had been silenced. Johnson's first of two stints with the D-Backs was magical to say the least. 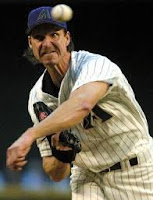 Manny Ramirez
With the Curse of the Bambino still in full swing, the Red Sox made the move in 2000 to sign the eccentric left fielder Ramirez. Although his actions off the field have since been revealed to be questionable, he went to the All Star Game every year and hit over 30 homers in all but two seasons. And let's not forget his curse-breaking performance in the 2004 World Series that was recognized with a World Series MVP.

Kirk Gibson
After having success with the Detroit Tigers for nine years, Gibson signed with the Dodgers prior to the 1988 season. His three-year career in LA was short-lived and injury-ridden, but he did something for the franchise that Dodgers fans will always be thankful for. In 1988, Gibson won the NL MVP with 25 home runs, 76 RBIs, 31 stolen bases, and a .290 batting average. Without the help of the Dodgers' rosters of the late 1970s and early 1980s, Gibson basically led LA's batting order to the World Series single-handedly, even though he was injured badly during the NLCS against the Mets and couldn't play in the Fall Classic. But in a surprise move by Dodgers manager Tommy Lasorda, Gibson was put in as a pinch hitter in the bottom of the ninth of Game One of the Series, even though he could barely walk. But miraculously, down by one run and going up against future Hall of Fame closer Dennis Eckersley with a man on base, Gibson hit a walk-off homer in his only at-bat of the '88 World Series. It's one of the most legendary moments in baseball history and basically propelled the Dodgers to the Series win. LA hasn't won one since.

In your opinion, what free agent moves this offseason could define a franchise? Leave your thoughts in the comments section below. Thanks for reading this post and I hope you enjoyed it. Have a wonderful Thanksgiving and check back soon for more of "all the buzz on what wuzz."