The Twins are (magically) in playoff contention! What an exciting time to live near the Twin Cities. In fact, one of my favorite hitters in baseball history played for the Twins. His name is Harmon Killebrew and he was purely awesome.

Ever hear of Willie McCovey? Well, think of Killebrew as his AL counterpart. The Indiana native played in the majors from 1954-1975 with the Senators/Twins and Royals, the latter for just a year. "The Killer," as he was nicknamed, actually didn't even play a full season until 1959, but boy, did he have a great year: 42 homers, 105 RBIs, and All Star Game appearance number one of eleven. Killebrew torched AL pitching throughout the years, amassing 40 homers in eight different seasons and leading the league in homers in six of those seasons. He also collected 100+ RBIs in a season nine times, three times leading the league in the category. All of these slugging milestones helped him reach the following career numbers: 573 homers (12th all time) and 1,584 RBIs (tied for 41st on the all-time list with the great Rogers Hornsby). He is one of 99 hitters in baseball history with a career slugging percentage over .500 (.509) and is 15th on the all-time walks list with 1,559. He must've been a pretty feared hitter, if he could work the count like that.

His best year in baseball was 1969, when he cracked a career-high 49 dingers, drove in a career high 140 runs, and walked an astounding 145 times, tied for the 20th most walks by a batter in a single season. His Twins went 97-65 and although they lost to the Orioles in the ALCS, Killebrew still won the MVP that year. Earlier in his career, during the '65 Fall Classic, Killebrew batted .286 (his career BA was .256) with a homer and two RBIs, but LA won the series in seven. 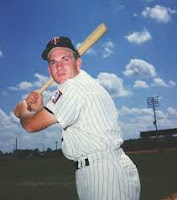 Despite never attaining the glory of winning a World Series, Harmon Killebrew was inducted into the Hall of Fame in 1984, his fourth year on the ballot, with 83.1% of the vote. Thanks for reading this post and I hope you enjoyed it. Check back soon for more of "all the buzz on what wuzz."
Posted by Matt Nadel at 4:26 PM