An All-Out Slugfest: The History of the Home Run Derby 7/9/17

The All Star Game Home Run Derby is tomorrow, pitting the best sluggers in a competition of who has the most power! Personally, it's my favorite side event of the MLB All Star Game, so here are some things to know about the Home Run Derby before watching it tomorrow on ESPN:

The Derby started in 1985, with five players from each League participating. The number of participants changed throughout the 90s, but the four-person-per-League format that is used today was adopted in 2000. The way the tournament has been set up has also changed over the years. From 1991, the first year it was televised, to 2013, all the players were playing against each other and were given ten "outs," or hits that weren't home runs, to hit as many home runs as they can. The top home runs hitters in each round moved on until the final two. For the 2017 Home Run Derby, for example, Giancarlo Stanton will square off against Gary Sanchez, the one seed vs. the eighth seed, in a March Madness-style, head-to-head battle, where each player will be given four minutes to hit as many home runs as they can.

Despite the rule changes, there have been some players who have clearly dominated the Derby. Todd Frazier of the White Sox leads all players in HRD history with 91 career Derby homers. He won the whole thing in 2015 while playing for the Reds. Josh Hamilton hit a single-round record of 28 home runs in the first round of the 2008 Derby, but eventually lost in the final round to Justin Morneau. Ken Griffey, Jr. and Yoenis Cespedes are the only two players to win the contest in back-to-back years (Griffey in '98 and '99 & Cespedes in '13 and '14). Griffey also won it in 1994, making him the only three-time champ. Prince Fielder is the only Derby participant to win it at least once in both Leagues, winning it in 2009 as a member of the NL Milwaukee Brewers and in 2012 as a member of the AL Detroit Tigers (pictured below). Hall of Famers to have won the homer tourney are Andre Dawson, Ryne Sandberg, Cal Ripken, Jr., Griffey, and Frank Thomas. 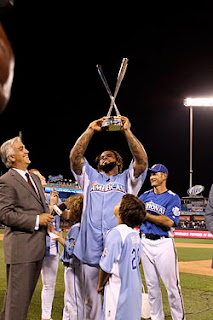 My favorite Home Run Derby that I've ever watched was in 2011, when in Chase Field, Robinson Cano of the Yankees, while being pitched to by his dad, beat Adrain Gonzalez of the Red Sox in the final round of a classic desert showdown. What's the favorite Derby you've ever watched and who do you think will win it tomorrow? Thanks for reading this post and I hope you enjoyed it. Check back soon for more of "all the buzz on what wuzz."
Posted by Matt Nadel at 12:07 PM