The Jackie Robinson of the American League 5/2/15

Jackie Robinson broke baseball's color barrier, but he broke the barrier as a member of the Brooklyn Dodgers, a National League team. So who was the first African American on an AL team? Well, this Hall of Famer played for the Newark Eagles of the Negro Leagues, missed time due to World War II, and then made his Major League debut with the Cleveland Indians on July 5, 1947: Larry Doby!

Larry Doby got his baseball career started in 1942 with the Newark Eagles of the Negro Leagues. His career stats aren't known for certain, but he definitely batted over .300, even though he missed two years of ball due to military service. Doby was a feared hitter across the Negro Leagues and helped his Eagles win the 1946 Negro World Series. Because of Doby's success, the MLB's Cleveland Indians took notice of him and Indians owner, Bill Veeck, had wanted to integrate baseball for quite some time. After Dodgers co-owner Branch Rickey bough Jackie Robinson's contract at the beginning of the 1947 season, Veeck saw the opportunity to do the same with Doby and on the fifth of July of that same year, Larry Doby made his debut for the Cleveland Indians. 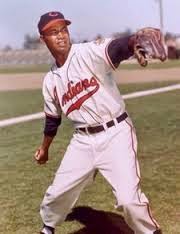 Lawrence Eugene Doby played in the MLB from 1947-1959 with the Indians, White Sox, and Tigers. In his 13-year Major League career, the first American League African American put up solid numbers: 1,515 hits, a .283 batting average, 970 RBIs, and 253 home runs. The seven-time All Star (all of his ASG appearances were consecutive, from 1949-1955) also had great stats in the postseason. His performance in the 1948 Fall Classic against the Braves was very respectable; his seven hits, homer, and two runs batted in helped the Indians win their second World Series and first since 1920. Doby had some great seasons that were MVP-worthy, but his best season came in 1954, when he led the league in home runs (32) and RBIs (126)! Not even Jackie Robinson did that!

Doby was inducted into the Hall of Fame in 1998 via the Veteran's Committee and rightfully so. He made the African American community proud by being one of the best players of his generation. Thanks for reading this post and I hope you enjoyed it. Check back soon for more of "all the buzz on what wuzz."
Posted by Matt Nadel at 5:19 PM