Jeter was drafted by the Yankees with the sixth pick of the 1992 MLB Draft. He was brought up to the majors in 1995 due to injuries on the Yankees' roster, but didn't become a full-time player until 1996. In '96, he won Rookie of the Year and led the Yankees to the World Series to face the Atlanta Braves and eventually won it, giving Jeter his first ring. 1998 was Jeter's first year of 200+ hits (his first of eight) and his first All Star Game (he would play in 14 during his career). He helped New York to the best record in AL history up to that point with 114 wins and the team eventually won the Fall Classic against the Padres in a sweep. 1999 was probably Jeter's best year offensively, batting .349 with 24 home runs, 102 RBIs, and 219 hits. The Yanks again won the World Series (ring number three for Jeter) and they would do the same the next year against the Mets. In fact, Jeter made history that year when he became the first man to win All Star Game MVP and World Series MVP in the same season after having a great 2000 World Series.

Jeter was always a great opposite field contact hitter, but his fielding gets a little lost when people talk about his greatness. The Yankee captain from 2003-2014 collected five Gold Gloves at shortstop. He also had some power, winning the Silver Slugger Award for shortstops five times.

From 2001-2008, Jeter never batted under .290 in a season, never had less than 150 hits, and never scored less than 85 runs in a season. He was doing phenomenally, but the Yankees weren't winning championships. Luckily for Jeter and the Yanks, that all changed in 2009. The Bronx Bombers won 103 games and the AL East title, while Jeter took sole possession of first place on the all-time Yankee hits list, passing Lou Gehrig for the title on September 11th, 2009. With the help of Derek, New York won its first World Series since 2000. That's one of the things that people love about Jeter: he helped his team win by hitting in the clutch, earning him the nickname Captain Clutch. 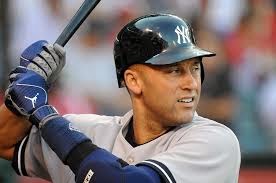 On July 9th, 2011, Derek collected hit number 3,000 on a homer off David Price of the Rays, becoming just the second man to hit a home run for his 3,000th hit (the first was Hall of Fame teammate, Wade Boggs). Jeter currently stands at sixth all time in hits with 3,465, along with a .310 lifetime batting average. He is also tenth all time in runs scored with 1,923.

Oh yeah, I almost forgot to talk about his famous plays. Who could forget his clutch game-tying homer in Game One of the 1996 ALCS against Baltimore (with the help of Jeffrey Maier, of course)? Who could forget the Flip he made to Jorge Posada to get Jeremy Giambi of the A's out at the plate in a critical Game Three of the 2001 ALDS? Who could forget his walk-off home run in Game Four of the '01 World Series against the Diamondbacks, the first home run in the history of the MLB in November? And finally, who could forget Jeter's dive into the stands to prevent Trot Nixon from getting a hit in a tough Summer game at Yankee Stadium against the Red Sox? (See the picture below of the "Dive" that will be appearing forever on the bottom center of the cover of my upcoming book, Amazing Aaron to Zero Zippers - An Introduction to Baseball History.) All of these plays will be forever remembered in baseball lore and it's amazing that Derek Sanderson Jeter was the player who executed all four of them. 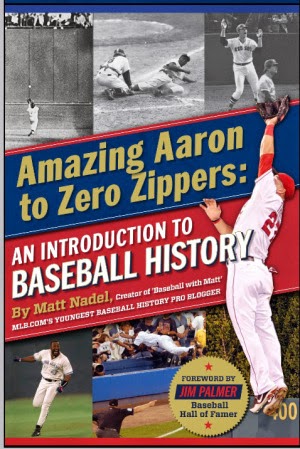 Again, it's very sad that Jeter is retiring, but he gave his heart and soul to the game and I have to give him RE2PECT for that. Anyway, thanks for reading this post. I hope you enjoyed it and check back soon for more of "all the buzz on what wuzz."