The 1998 Yankees are considered one of the best teams of all time, winning 114 games and, eventually, the World Series. They had a great offense, but they also had excellent starting pitching. Guys like Andy Pettitte, David Wells, Hideki Irabu, and David Cone propelled the Yankees to a season for the ages. However, besides the pitchers I just mentioned, there was one more guy on that starting rotation that was probably the most exciting to watch: Orlando Hernández. 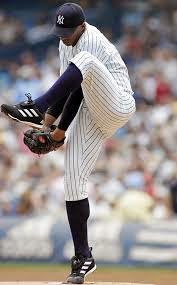 1998 was Hernández’s first year in the majors, as he signed with the Yankees mid-season after coming over to the United States from Cuba at the age of 32. He went 12-4 with an ERA of 3.13. He placed fourth in the Rookie of the Year voting and from ’98 on, “El Duque” had a very respectable career. But before his American career, he played in Cuba. The Cuban national team, with the help of Orlando, placed first in the 1992 Olympics in Barcelona, as well as eight other international baseball competitions.

Thanks for reading this post. I hope you enjoyed it and check back soon for more of “all the buzz on what wuzz.”
Posted by Matt Nadel at 2:54 PM