Robin Roberts: I'm Talking About the Pitcher, Not the Newscaster 6/14/14

The Philadelphia Phillies are in last place in the NL East right now, but they don't have too much to sob about: they have a couple of great stars like Ryan Howard and Chase Utley. This theme of playing badly, but having great players on the roster has been very recurring for the Phillies since their creation. A great example of a guy who played for really bad Phillies teams was Robin Roberts (the pitcher, not the Robin Roberts on Good Morning America).

Robin Evan Roberts played for the Phillies, Orioles, Astros, and Cubs from 1948-1966. He was the ace of the Phillies staff for 14 of those years and was a fan favorite on the mound in the City of Brotherly Love. Roberts won 286 games during his Hall of Fame career, with a lifetime ERA of 3.41. The seven-time All Star led Philadelphia to its first World Series in 35 years in 1950, after going 20-11 during the regular season. He flourished for the next several years, winning 20 or more games from 1950-1955. He even led the league in wins from 1952-1955. From 1950-1956, Robin led the National League in games started in a season six times, complete games in a season five times, innings pitched in a season five times, and strikeouts in a season twice. No wonder he was voted into the Baseball Hall of Fame in 1976. But he never won a Cy Young Award, because that award wasn't given out in the MLB until 1956. 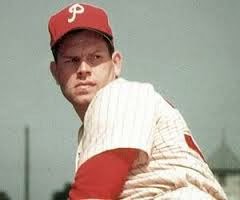 Although the Phillies didn't do too well during the '50s and early '60s, at least they had Robin Roberts on their roster. Anyway, thanks for reading this post. I hope you enjoyed it and check back soon for more of "all the buzz on what wuzz."
Posted by Matt Nadel at 9:46 PM