A couple of days ago, it was Babe Ruth's birthday! However, considering I've blogged about him a number of times, today I will be telling you about one of his fellow Hall of Fame teammates. It's not Lou Gehrig or Tony Lazzeri. It's the Kentucky Colonel, Earle Combs!

The Pebworth, Kentucky native played with just the Yankees in his career from 1924-1935 and helped them win three of their first four World Series championships. The man who batted .325 lifetime was very excellent in the outfield, leading the AL in putouts twice. Combs was also a speedster and led the American League in triples three times. Coincidentally, his best year was in 1927, when the Murderers' Row Yankees demolished the AL en route to a World Series crown. In that year, Earle hit .356 with 231 hits and 23 triples. He averaged almost 100 runs scored a season and also hit over .300 in ten seasons. Although injuries cut his career short, the Kentucky Colonel was inducted into the Hall of Fame in 1970 via the Veterans Committee. 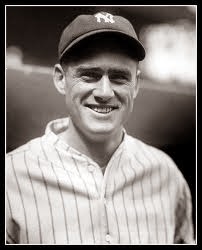 Even though he's one of the lesser known Hall of Famers who played for the Yankees, Earle Combs proved that his career is definitely not negligible. Thanks for reading this post. I hope you enjoyed it and check back in a few days for more of "all the buzz on what wuzz."
Posted by Matt Nadel at 4:56 PM